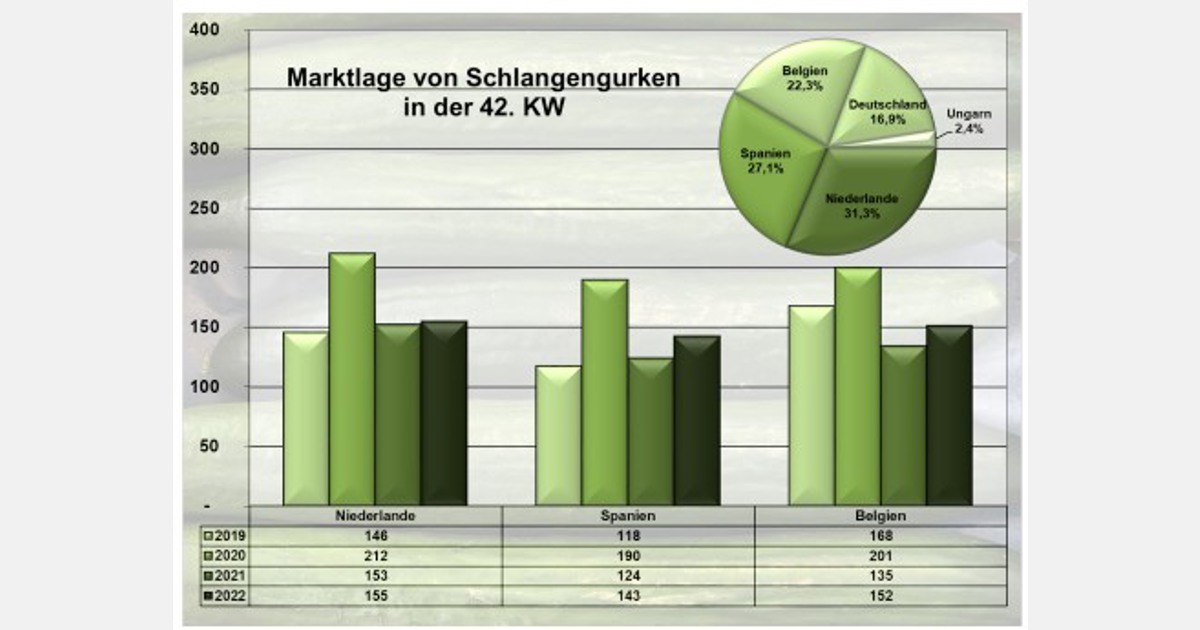 In the snake cucumber segment, Spanish products have become increasingly visible; already dominate the scene in various places. According to the BLE, the presence of domestic and Dutch batches had decreased. The Belgian batches no longer went beyond an additional character. Business was pretty quiet. Locally, the product range turned out to be a little too extensive. In these cases, traders were forced to reduce their previous prices if they wanted to avoid the stocks.

In the case of mini cucumbers, constant prices have sometimes been recorded, provided that supply and demand are sufficiently balanced. These products came mainly from Germany and the Netherlands, with Turkish imports completing the market.

Apples
Local fruits predominated. Elstar, Jonagold and Boskoop formed the basis of the assortment. In Berlin, meanwhile, Kanzi, Ambrosia and Pink Lady experienced immediate and sympathetic interest at €2.15 to €2.40 per kg. In Munich, domestic topaz and Cox orange were not always of the best quality, so traders had to lower their prices.

Easy peelers
In the case of clementines, the assortment consisted mainly of South African and Spanish products. The Italian lots obviously only had a complementary character. Satsumas came from Spain and Italy, and mandarins from South Africa, Peru and Spain.

Lemons
The presence of South African and Argentinian imports has shrunk very significantly. Spanish expeditions, on the other hand, have become much more relevant. However, these were not always convincing in terms of quality. In Berlin, the Spanish Verna therefore attracts little attention. In Munich, on the other hand, the exclusive Primofiori from Spain have become more expensive.

Bananas
Demand turned out to be quite good and sales definitely increased. The demand could not always be fully satisfied. Therefore, traders were able to increase their prices on various occasions.

Cauliflower
National offers obviously dominated the events. In terms of quantity, Belgian and Dutch products were probably second. In Frankfurt there were cheap Polish imports as well as small deliveries from Denmark.

Salad
While the presence of domestic and Dutch iceberg lettuce was limited, the importance of the Spanish batches increased significantly. The quality range of domestic products was quite wide, with small sizes and some weaknesses on the one hand, but quite exclusive offers on the other.

Tomatoes
Belgian, Dutch and Turkish supplies formed the basis of the assortment; the latter had extended its presence. Since the Turkish TOVs were cheaper than those of the competition and were also quite convincing in terms of quality, the fruits from the BeNeLux countries came under pressure and often fell in price.

sweet pepper
Dutch deliveries clearly dominated the market. The Spanish offers followed in terms of importance. The Belgian, Polish and Turkish batches had a complementary character. Business was quiet. Supply and demand generally balanced each other, so traders did not have to change their prices too often.