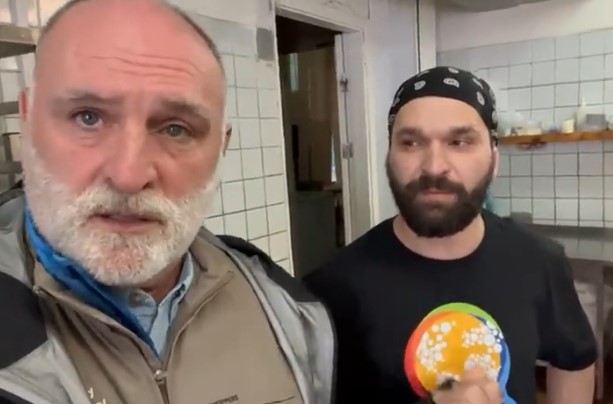 Chef Jose Andres with one of the WCK volunteers. Picture: [email protected]@chefjoseandres

As reported on his official Twitter account this Sunday, April 17, a missile strike hit the Kharkiv region where Spanish chef Jose Andres works in northeastern Ukraine. The chef operates in one of the NGO World Central Kitchens, where a missile struck on Saturday evening.

Four people were reported injured, with no fatalities. Chief Andres has been in Ukraine almost since the start of the conflict. He confirmed that the injured “are fine. Everyone is ready, and wants to start cooking elsewhere”.

In a video posted today on Twitter, fellow WCK member Nate Mook said, “It’s the reality here, cooking is an act of heroic bravery. Yesterday I was here distributing food…”. His video shows the devastation caused by the attack, surrounded by burnt-out cars and wrecked vehicles hanging from trees.

“There is still fire in a building. It was a blow,” Mook continued. “It’s a civilian area, where people live and work,” he explained. Team members have been busy today salvaging all the undamaged equipment they can. They will then move to a new location in Kharkiv and resume their task of distributing food to people as soon as possible.

After learning of the attack, Pedro Sanchez, the President of the Government, contacted Jose Andres to wish a speedy recovery to the injured and to show his support for the work of WCK. In 2021, this organization received the Princess of Asturias Award for Concord.

“Thank you for the immense and supportive work you are doing to help alleviate the effects of this cruel war,” Sanchez said on Twitter. Adding, “Spain will continue to be fully committed to Ukraine.”

An update that I hoped never to have to do. I am at one @WCKitchen restaurant in Kharkiv, where less than 24 hours ago I was meeting their amazing team. Today, a missile stuck. 4 staff members were injured. It’s the reality here: cooking is an act of heroic bravery. #ChefsForUkraine 🇺🇦 pic.twitter.com/AyU4fUnA61

Report with chef Dimitry in one of our @WCKitchen partners in Kyiv! The team here is preparing 1,500 meals a day for refugees from Bucha and Irpin…the cancer hospital…and today we delivered the area of ​​Brovary hit by missiles last night and today n there was no electricity or water! #ChefsForUkraine 🇺🇦 pic.twitter.com/GxYgNaaxAl

Thank you for taking the time to read this article, don’t forget to come back and check it out The weekly euro news website for all your up-to-date local and international news and remember, you can also follow us on Facebook and instagram.