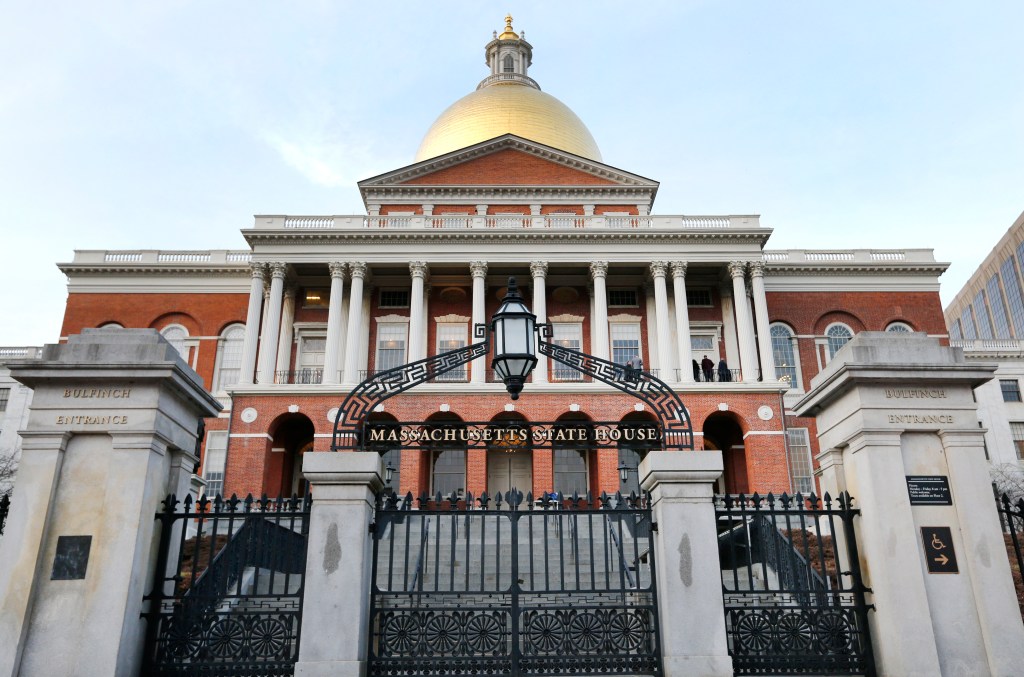 THE HOUSE AND SENATE: Beacon Hill Roll Call records the votes of local representatives and senators from the week of March 15-19.

The House, 145-14, and Senate, 39-1, approved and sent to Gov. Charlie Baker a lengthy climate change bill. A key section makes the state’s greenhouse gas emissions reduction goal net-zero by 2050. The House and Senate both voted to adopt many of the amendments that Baker proposed to the original measure approved by the Legislature in February.

Other provisions in the measure codify environmental justice provisions into Massachusetts law by defining environmental justice populations and providing new tools and protections for affected neighborhoods; provide $12 million in annual funding for the Massachusetts Clean Energy Center to create a pathway to the clean energy industry for environmental justice populations and minority- and women-owned businesses; require an additional 2,400 megawatts of offshore wind and increase the state’s total authorization to 5,600 megawatts; set appliance energy efficiency standards for a variety of common appliances including plumbing, faucets, computers and commercial appliances and set benchmarks for the adoption of clean energy technologies including electric vehicles, charging stations, solar technology, energy storage and heat pumps.

“History has been made today with the passage of the Next-Generation Roadmap bill,” said Rep. Tom Golden, D-Lowell. “The roadmap sets us on a strong course to net-zero by 2050 and significantly advances offshore wind, truly representing the best ideas from both chambers. Hats off to the House and the Senate for holding firm on ambitious emissions targets.”

“Massachusetts leads the nation in reducing carbon emissions, of which there are some measures that I have supported,” said Sen. Ryan Fattman, who was the only senator who voted against the measure. “However, this legislation, often described as ‘far reaching’ by the media and economic experts, will ensure the costs of building homes and commercial economic development dramatically increase, making us the most expensive state in the nation to live and do business. In this time of economic recovery from COVID-19, this is not only inadvisable, it is detrimental to the long-term interests of keeping Massachusetts affordable and prosperous.”

“Today, the Legislature will take an important step toward a cleaner, healthier future by putting the climate bill back on the governor’s desk,” said Ben Hellerstein, state director for Environment Massachusetts. “I applaud House and Senate leaders for preserving the key elements of last session’s bill, including energy efficiency standards for appliances, expanded offshore wind procurements, and a requirement for at least 40% of Massachusetts’ electricity to come from renewable sources by 2030. If Gov. Baker vetoes the bill, I hope legislators move quickly to override the veto and turn this bill into a law.”

A new study by the Beacon Hill Institute says that legislation calling for a net-zero emissions policy by 2050 is flawed and unrealistic.

“In this study, we conclude that this legislation is misconceived,” said co-author David Tuerck, president of the institute. “The ‘absolute zero’ approach embodied in the legislation would be economically ruinous. It would increase costs to the average Massachusetts household to unacceptable levels. If the commonwealth sought to reduce emissions by 100%, the price of a gallon of gasoline would have to rise above $14.10.”

“The Next-Generation Climate Roadmap Act reflects the concerns of people of every age, from every part of the state,” tweeted Sen. Mike Barrett, D-Lexington.

“There is little doubt the legislation that passed today, if it becomes law, will cost taxpayers and businesses greatly in the future,” said Massachusetts Fiscal Alliance Executive Director Paul Diego Craney. “The only questions that remain are just how much it will cost them and how ordinary, working-class families will be able to pay for it moving forward. Today’s legislation puts ideology ahead of common sense. It asks nearly every resident to make economic sacrifices in order to achieve unrealistic and ideologically driven climate goals.”

The Senate, 40-0, approved a bill that excludes Paycheck Protection Program (PPP) loans from being taxed by the state in 2020; excludes $10,200 of unemployment compensation received by an individual with a household income of less than 200% of the federal poverty level from gross income for tax purposes; and makes employees eligible for up to five days of paid leave, at their regular rate of pay, capped at $850 per week.

Other provisions waive penalties on unemployment insurance taxes; freeze unemployment insurance rates paid by employers; create a mechanism ensuring all employees will be able to access 40 hours of paid sick time for any COVID-related issues, including testing positive, needing to quarantine or caring for a loved one; and extend the state’s tax filing deadline from April 15 to May 17. The day after this vote, the Department of Revenue, citing powers it says it can use when the U.S. president declares a disaster, unilaterally moved the Massachusetts tax filing deadline to conform with the postponed federal deadline of May 17. DOR said Massachusetts individual personal income tax returns and payments for the 2020 tax year that would have been due April 15 are now due May 17 under this automatic extension.

Businesses would also face a new surcharge, in the form of an excise tax on employee wages, through December 2022 to help repay interest due in September on the federal loans.

“In January, I declared that we must act quickly to provide our workers with COVID-19 Emergency Paid Sick Leave, and today the Senate has delivered on that promise,” said Senate President Karen Spilka, D-Ashland. “I am proud of the collaboration that brought about this agreement, which will provide needed relief for both businesses and workers … As we continue to recover from the COVID-19 emergency, these measures will provide stability to our economy, and keep workers safe.”

“No worker should have to choose between staying home if they risk spreading COVID-19 and earning a paycheck to support their family, but unfortunately this impossible choice faces many workers who do not have adequate job-protected paid sick leave during this pandemic, especially low-income essential workers,” said Sen. Jason Lewis, D-Winchester.

“As we slowly emerge from the COVID-19 pandemic, I am proud of the collective action taken by the Senate and House to pass this comprehensive bill that strikes a balance to help businesses, workers, and jump start an equitable recovery for our commonwealth,” said Sen. Mike Rodrigues, D-Westport, chair of the Senate Committee on Ways and Means. “With more people getting vaccinated by the day, and our economy re-opening, this bill will bring much needed relief to small businesses, keep our essential front-line workers safe, and target tax relief to lift up low-income families who lost jobs during this pandemic.”

The House has approved a different version of the measure and the Senate version now goes to the House for consideration.

TAKE-OUT AND DELIVERY OF ALCOHOL BEVERAGES

The Senate, 9-30, rejected an amendment that would extend the life of a current law that allows restaurants during the pandemic state of emergency to sell sealed containers of mixed drinks, beer and wine with take-out and delivery orders. Under the current law, restaurants would be able to continue do this only until the governor lifts the ban. The amendment would extend the law for another two years after the governor lifts the ban.

“A year into the state of emergency we are seeing glimmers of hope for economic recovery,” said Sen. Diana DiZoglio, D-Methuen, the amendment’s sponsor. “But businesses, particularly in the food and beverage sector and other segments of the hospitality industry, are still in survival mode. If we have any intention of helping them actually recover, we will continue to need programs like beverages to-go that provide our restaurants with much needed revenue streams now and in the future.”

(A “Yes” vote is for extending the take-out and delivery of alcoholic beverages for two years following the end of the emergency. A “No” vote is against extending it).

The Senate, 8-31, rejected an amendment that would permanently cap delivery fees by third parties like Grubhub, DoorDash and Uber Eats at 15% of the order price. The amendment would replace the current law, which lifts the cap on the day the governor lifts the pandemic emergency.

“We finally addressed the issue of capping third-party delivery fees to prevent price-gouging and pandemic-related windfalls in January of this year, ten months into the state of emergency as our restaurant industry was hanging on for dear life,” said sponsor DiZoglio. “We know that even when the state of emergency comes to an end and businesses are allowed to fully reopen that recovering from the losses incurred during this strange chapter of our history will take a very long time. We need to make permanent the cap on the amount that third-party delivery services are able to charge local restaurants at 15% of the purchase price of the online order. The need to regulate these fees will persist as delivery services continue to play an ever-increasing role in our lives post-pandemic. If we agree these delivery services should not be able to price gouge during the pandemic, we should agree they should not be able to price gouge once the state of emergency is lifted.”

“I have been a strong supporter of measures to support the restaurant industry during the COVID-19 pandemic, including capping delivery fees charged to restaurants and allowing limited cocktails to go,” said Sen. Cindy Creem, D-Newton. “These measures are currently in place and will remain in place throughout the duration of the governor’s declaration of a public health emergency. … I did not believe the underlying bill — focused on time-sensitive tax relief to businesses and individuals — was the appropriate legislation to consider these important issues, and I look forward to considering them as separate legislation after the public hearing process.”

(A “Yes” vote is for making the cap permanent. A “No” vote is against making it permanent.)

The Senate, 8-31, rejected an amendment that would create and fund a $5 million Business Relief Fund to provide grants to struggling businesses affected by COVID-19 that thus far have not qualified for grants because of a lack of operational and income history. The amendment requires that businesses must have been open at least 90 days before the pandemic state of emergency was declared and on the day it was declared.

Amendment supporters explained that businesses that were not in business in 2019 don’t have income tax returns and other documentation from 2019 to compare to 2020 and show how their business has been adversely affected.

“When people dedicate their lives and their savings to starting their own businesses, to contributing to the economy and to the strength of the workforce by hiring and training employees, only to be told that they haven’t been around long enough to receive the aid that is being offered to established businesses, it is devastating,” said sponsor DiZoglio. “They deserve a chance to survive, to see a return on their investment, to contribute to the tax base and employ our family, friends, neighbors and fellow residents of the commonwealth. Every additional business that survives the pandemic in Massachusetts will enhance the longer-term health of our economy.”

Amendment opponents said they are open to the idea of the relief fund but argued that the Senate should focus on the bill itself which offers millions of dollars in relief to businesses rather than add amendments at this juncture. They said this idea can be revisited in the future.