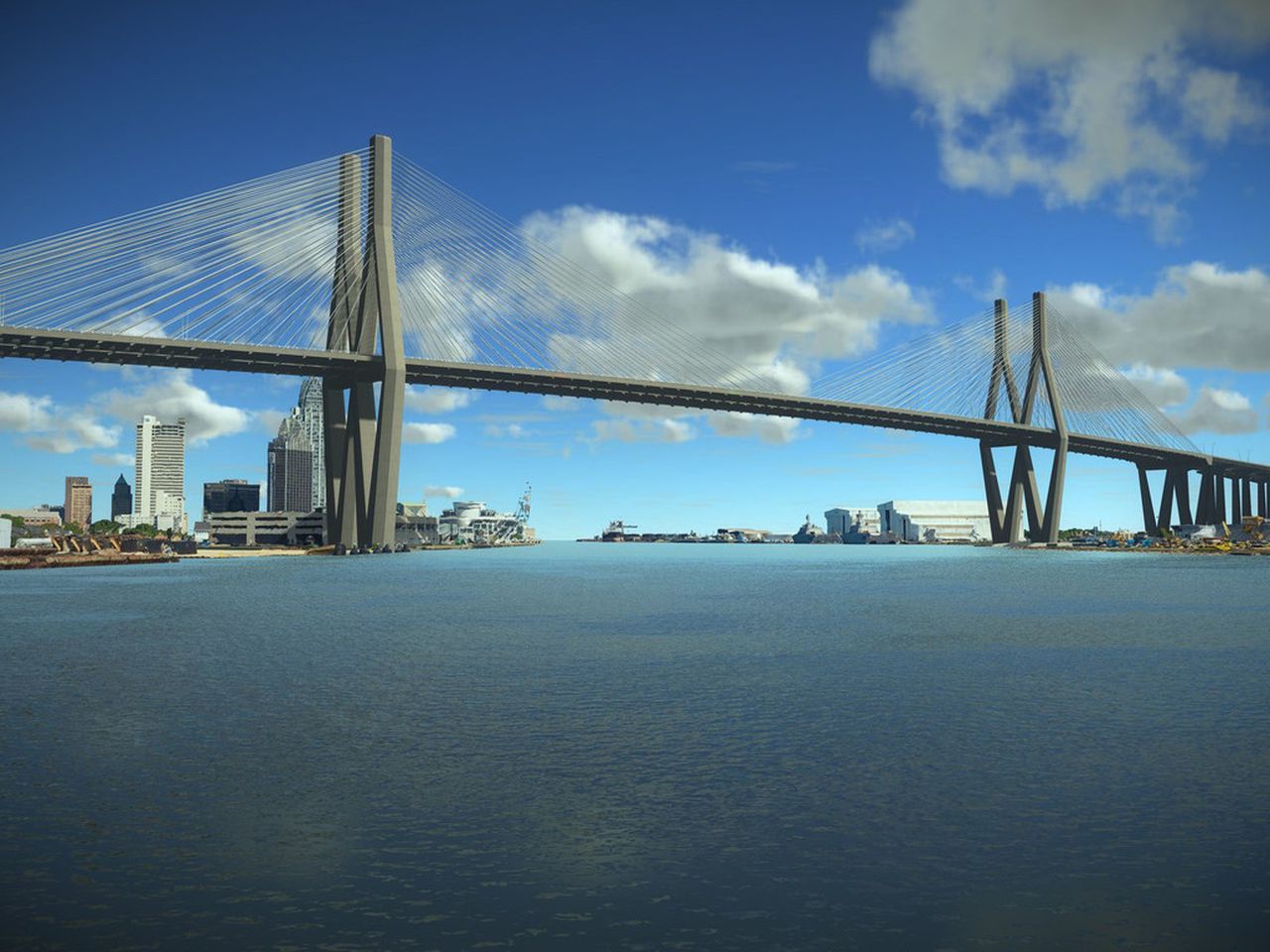 A toll of $10 to $15 on large semi-trailers to help fund a truck bridge over the Mobile River could be unconstitutional, a national trucking association representative said.

But local leaders say the toll, which would help fund the latest plan to ease traffic on Interstate 10, is different from truck tolls in other states that are being challenged in federal court.

Legal questions over whether a truck toll is allowed will be a lingering issue going forward in Alabama, where the trucking association is voicing concerns over a $725 million plan for the I-10 unveiled Monday at of a press conference at the Five Rivers Delta Resource Center in Spanish Fort.

The latest I-10 project is an alternative proposal to the previous one Overhaul of a $2.1 billion bridge and bayway that collapsed in 2019 due to toll concerns.

“We’ll be watching what they do in Alabama like a hawk,” said John Lynch, senior vice president, Federation Relations and Industry Affairs, American Trucking Association. “We wonder if this violates the dormant trade clause. This is a blatant attempt to shift blame onto the trucking industry.

The Dormant Commerce Clause is a legal doctrine that prohibits states from discriminating against interstate commerce. A federal lawsuit in Rhode Island challenges that state’s truck toll system, with the industry arguing that it discriminates against out-of-state businesses, violating the Commerce Clause of the Constitution.

Rhode Island’s situation, however, is different from Alabama’s, officials said. In Rhode Island, state leaders assessed a dozen statewide tolls on roads used by both cars and large trucks.

“We realize that,” said Vince Calametti, a retired engineer with the Alabama Department of Transportation’s Southwest Region who provides consulting services on the latest I-10 project. “The bridge (I-10) would be built exclusively for trucks, so we don’t think it will be suitable for this situation.”

The latest I-10 draft will consider the following:

– Prohibit large trucks over 46 feet in length from crossing the Wallace Tunnel, requiring them to divert over the Mobile River onto a truck-only bridge. The design of the new bridge would be similar to a previous concept – a 215-foot-tall “air project” cable-stayed structure, or high enough to accommodate large transport ships and cruise ships passing under.

Officials estimate that removing large trucks from the tunnel will reduce average passenger car delays by “around 60 to 90 minutes” during peak periods. In 2019, when discussing the previous plan, ALDOT had anticipated the average number of vehicles traveling daily on I-10 through the Wallace Tunnel to increase from 75,000 per day to 95,000 per day in 2040. on vacation, before the coronavirus pandemic, typically draw about 100,000 vehicles a day to the Bayway, according to ALDOT.

–Divert dangerous freight routes from the Africatown community north of downtown Mobile. Large trucks often pass through Africatown via the Cochrane-Africatown USA Bridge. Mobile city and county authorities are considering turning the neighborhood into a tourist attraction after the 2019 discovery of the Clotilda slave ship.

-Restripe and convert the Bayway from two lanes to three lanes in each direction. Officials say the restriction will increase traffic flow by around 40%. The Bayway, under the previous plan, would have been replaced with a new 7.5-mile, eight-lane span across the Mobile River connecting downtown Mobile to US 98 in Daphne.

-Protect existing routes from tolls and fees. Only 18-wheelers and similar large trucks traveling on the truck bridge would pay a fee that officials say is less than half the fee envisaged in the previous plan. No car or small truck would be subject to a toll. The previous plan had a $6 one-way toll assessed on users of the new Bayway, although the Spanish Fort Causeway would have remained toll-free. The criticism under the previous plan was the inclusion of the Wallace Tunnel as part of the toll plan.

Meanwhile, the fate of a federal grant looms as officials from both counties scramble to find an alternative to the $2.1 billion project. Mobile Mayor Sandy Stimpson said the protection of a $125 million federal grant that U.S. Senator Richard Shelby secured for the previous iteration of the project “is critically important,” and Calametti said that the deadline to use it was in the third quarter of 2022.

Calametti said the state was willing to spend $250 million on the project. The balance of the project costs would be covered by the road toll.

Tony Harris, spokesperson for ALDOT, said the agency was “committed to working with local leaders to explore and develop” the new plan. He said the Mobile River Truck Bridge concept “creates a new pathway to meet the Gulf Coast’s most pressing transportation needs.”

Lynch of the American Trucking Association said Alabama’s plan looked like a “race for federal funds” that would expire if not spent.

He added, “The first question that comes to mind is if this were to solve the congestion and be an improvement, why is the trucking industry the only entity paying when everyone benefits?

The head of the Alabama Trucking Association said his organization plans careful consideration of a proposal that he says “raises important questions.” The state trucking association, in October, announced it was joining the American Trucking Association and other state associations to fight Rhode Island’s truck-only toll program.

“As this process unfolds, we hope that all interested parties will be willing to come together to offer reasonable solutions bearing in mind that throughout the pandemic, truckers have worked tirelessly to move America forward,” Colson said.

The decision to move forward with the latest plan will come from Mobile and Baldwin county metropolitan planning agencies. The groups, which are made up of locally elected politicians, will need to include the I-10 Mobile River Bridge project in their short-term “Transportation Improvement Plan” (TIP) for federal money to be applied to the project. . Two separate votes will take place, and their timing could take place within the next six months.

Calametti said if DFO supports the project, it could be under construction by 2022 or 2023. He said construction could take four years.

Stimpson said the project remains “conceptual” and will need DFO support before it can move forward. DFO Eastern Shore, which represents the Baldwin County towns of Daphne, Fairhope, Loxley and Spanish Fort, voted to have the previous plan removed from its TIP in August 2019.

The decision prompted Alabama Governor Kay Ivey declare the whole project “dead”, and she has since said it was up to local politicians to come up with an alternative to ALDOT’s $2.1 billion proposal that would have been the state’s first-ever public-private partnership (P3) project.

Ivey, in a statement, praised the latest effort.

“I commend local leaders for coming up with a concept that solves the growing problem of traffic congestion, imposes no tolls on passenger cars or vans, keeps existing roads toll-free and secures the $125 million federal grant. dollars for the region,” she said in a statement to AL.com. “It really looks like a win-win idea.”