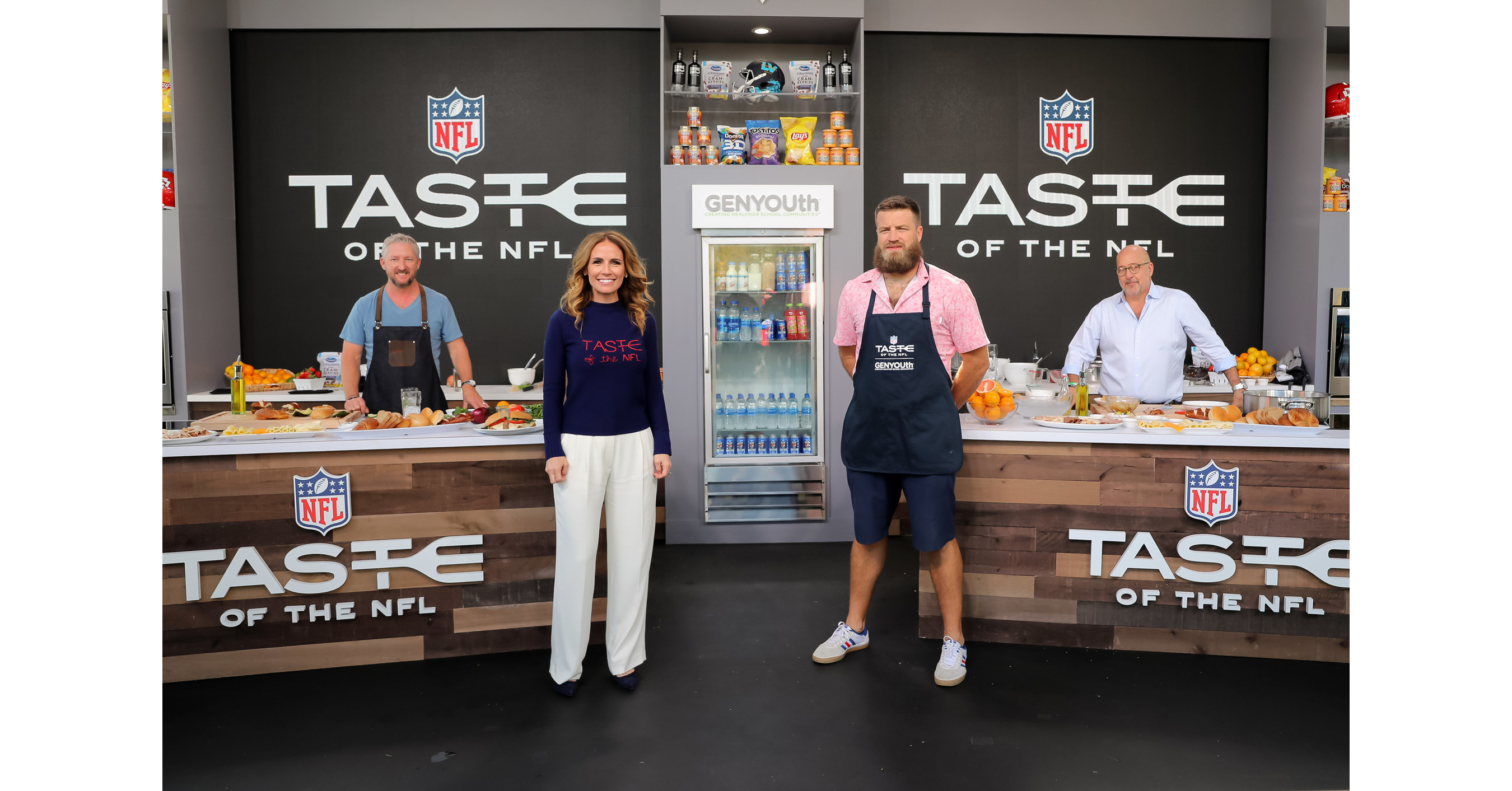 With the pandemic transforming every aspect of Super Bowl LV, Taste of the NFL @Home has been completely redesigned as the first-ever virtual and interactive live stream broadcast from Raymond James Stadium in Tampa, Florida. The event, which took place the Super Bowl Sunday February 7, was one of the most accessible and successful Taste of the NFL celebrations ever in its 30-year history, with thousands of fans “at home” from their kitchens in support of the COVID-19 Emergency GENYOUth’s School Meal Delivery Fund, which provides schools with grants to purchase the equipment and resources needed to feed students during the pandemic.

“We never could have imagined how successful Taste of the NFL would be this year, with a unique virtual game day experience that engaged fans everywhere and opened the event to an exponentially wider audience that able to attend from his home,” said Peter O’Reilly, NFL Executive Vice President Club Business & League Events. “By bringing together some of the nation’s top chefs and sports icons to raise funds on behalf of youth struggling with food insecurity, we are proud of what we have accomplished with GENYOUth in Tampa and I can’t wait to take this virtual experience to the next level at Super Bowl LVI by Los Angeles.”

“At PepsiCo, our mission is to create more smiles with every sip and bite. This year, food insecurity among our most vulnerable children is a growing and ongoing need. We are proud of our partnership with the NFL and GENYOUth to help increase access to nutritious school meals across the country,” said steven williams, CEO, PepsiCo Foods North America.

“We are deeply grateful to all of our partners and supporters who have stepped up to help deliver over 125 million meals through Taste of the NFL @Home and the chunky®, Million Meals Challenge, starting with PepsiCo and including Campbell’s® chunky®, American Dairy Farmers, NFL, Doritos®, EA SPORTS and CSL Esports. Plus, we couldn’t have done this without the recipe ingredients provided by BUSH’s® Beans, sea spray® Craisin® Dried cranberries, Kretschmar® Charcuterie from Smithfield Foods, GameDay vodka and fresh produce from Florida oranges,” said Alexis Glick, CEO of GENYOUth. “With one in four children at risk of food insecurity, schools need our help now more than ever, and these important leaders demonstrate why public-private partnerships are so important in moving the needle to address child hunger. We can’t wait to top this year’s numbers and deliver even more meals as we head into next season and Super Bowl LVI.”

Funds raised through Taste of the NFL @Home and the chunky® Million Meals Challenge will be used to purchase urgently needed equipment and resources for schools to deliver meals to the 30 million students who rely on school nutrition daily. As a result of Taste of the NFL @Home efforts, schools that will receive funding to serve meals to their students in need include this year’s host city for Super Bowl LV, Tampa, Florida, as well as the other 30 cities that are home to NFL teams.

For more information about GENYOUth, visit www.genyouthnow.org, or to make a one-time donation of $25 to the GENYOUth COVID-19 School Lunch Delivery Fund, text TASTE to 20222.

About GENYOUthGENYOUth is a 501c3 nonprofit organization that creates healthier school communities. We bring together a network of private and public partners, including Fortune 100 corporations and foundations, to raise funds for youth wellness initiatives that give young people the inspiration, motivation and programs needed to become healthy, high-achieving students. GENYOUth’s flagship program, Fuel Up to Play 60, serves more than 73,000 US schools, reaching more than 38 million students. Our school nutrition grants improve access to healthy school meals for food-insecure students. NFL FLAG-In-School is GENYOUth’s fastest growing program with over 20,000 school communities reaching over 11 million students, while AdVenture Capital brings out the entrepreneurial spirit and creativity of students with the support of business mentors to solve real-world problems.

About PepsiCo PepsiCo products are enjoyed by consumers more than a billion times a day in more than 200 countries and territories around the world. PepsiCo generated more than $67 billion in net revenue in 2019, thanks to a complementary food and beverage portfolio that includes Frito-Lay, Gatorade, Pepsi-Cola, Quaker and Tropicana. PepsiCo’s product portfolio includes a wide range of enjoyable foods and beverages, including 23 brands that each generate more than $1 billion in estimated annual retail sales. Leading PepsiCo is our vision to be the global leader in convenient food and beverage by winning with purpose. “Winning with Purpose” reflects our ambition to sustainably win in the marketplace and embed purpose into all aspects of the business. For more information, visit www.pepsico.com.