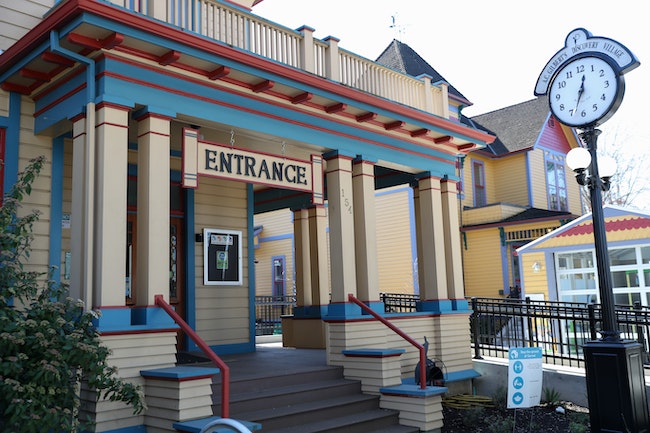 A ghostly ping echoes off the walls inside the Gilbert House Children’s Museum.

The historic home near Riverfront Park would normally be filled with the sounds of children calling for a friend to join them in a blanket fort or applying glitter glue to an art project.

But for the past year, executive director Alicia Bay has worked from her upstairs office in near-total silence as the museum closed due to the pandemic and laid off most of its staff.

The sonar ping inside the model submarine exhibit served as a reminder that one day the children will return.

Now the reopening is near.

Starting March 22, the museum will welcome families by appointment only to play in Bill’s Bubble House, a new outdoor exhibit built last year. Five families per day will visit for up to one hour. The appointments were first open to members, then filled up in a few days once accessible to the general public.

The following week, reservations will open for children and families to enjoy the new outdoor play area, with up to 25 people visiting during a two-hour window. By April 9, some indoor areas of the museum will be open. Reservations will allow up to 40 people at a time to visit in two-hour blocks to preserve distance between groups. Children five years and older will be required to wear masks during the tour.

Bay said the past year has been a financial challenge, but Gilbert House’s long-term prospects are strong.

“We’re not in danger of closure,” Bay said.

The children’s museum is a nonprofit organization and derives about 80% of its revenue from memberships and admissions, Bay said. Closing the doors cut off most of the museum’s revenue overnight.

With layoffs and a mix of federal and state aid, including two Federal Paycheck Protection Program loans totaling $115,000, Bay said the museum survived the past year without dipping into its financial reserves.

A staff of 17 before the shutdown was reduced to just four full-time employees in the fall.

Now they are back at seven as they prepare to reopen, she said.

Museum leaders decided to go ahead with a 30th anniversary renovation, knowing it would be months before children could enjoy the new spaces. Bay said funds have already been raised, although the closure has allowed more time to complete a new exhibit and make changes to the outdoor play area.

Bill’s Bubble House, an enclosed structure in front of the museum, replaces a favorite family exhibit which flooded the historic home in 2012. Inside, kids can lock themselves in a bubble and experience the physics that make this possible.

The houses also have new ramps at the front, making them accessible to people with reduced mobility and wheelchair users. The outdoor playground has been redesigned.

Some pandemic-inspired activities and changes will remain in place even after restrictions are lifted, Bay said. The museum held a successful “Gizmo Trick-or-Treat” Halloween event in the fall where children on the sidewalk surrounding the museum had candies transported to them by elaborate machines.

The design was meant to promote physical distancing, but was so much fun the museum plans to bring it back, Bay said.

There also remains a storybook exhibit on the west side of the museum campus, where a picture book is displayed sequentially on a dozen plastic kiosks, allowing passers-by to read the book as they walk.

Reservations for tours after Spring Break are not yet available, but information on tour times and appointments will be posted on the museum website.

Meanwhile, employees are putting the finishing touches on regular exhibits to prepare them for the return of the first children.

Salem Reporter relies on community support to fund vital local journalism. You can help us do more.

SUBSCRIBE: A monthly digital subscription starts at $5 per month.

PRESENT: Give someone you know a subscription.

SINGLE PAYMENT: Contribute, knowing your support is going towards more local journalism you can trust.