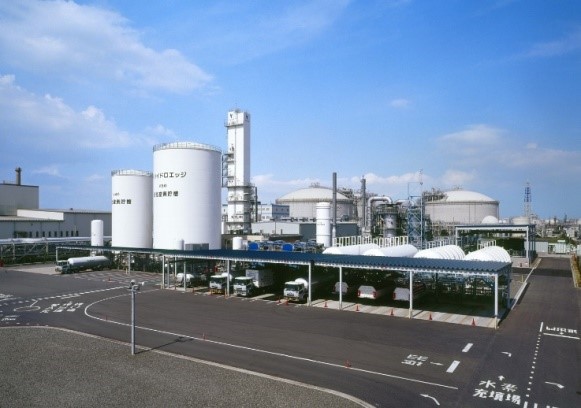 In October 2020, Japan gave the world a clear vision of a carbon-free future.

Declaring the nation’s bold ambitions to become fully decarbonized within 30 years by reforming its industrial structure and launching a socio-economic transformation, the Japanese government has announced that it will implement new ideas, technologies, investments and resources in a campaign called the Green growth strategy.

Hydrogen, a clean energy without CO2 emissions, is one of the most innovative sectors of green growth. Japan’s continued technological advancements bring hydrogen to the cusp of adoption for a range of applications, including powering passenger cars, power generation turbines, steelmaking, heavy vehicles and ships.

Including hydrogen in Japan’s carbon-neutral planning would be impossible without the advances of Japanese companies such as Kawasaki Heavy Industries (KHI), a pioneer in the efficient, large-scale storage and transportation of liquefied natural gas (LNG) in Asia.

In 1981, KHI became the first Asian company to manufacture an LNG carrier. Since that milestone, the company has become a leader in cryogenic technology for shipping.

Since 1983, the company has developed, manufactured and operated a liquefied hydrogen storage tank at the JAXA Tanegashima Space Center rocket launch site.

The hydrogen liquefaction system, installed in the hydrogen technology demonstration center at the Harima plant, has the capacity to liquefy about five tons of hydrogen per day.

This system is built on KHI’s technology for handling cryogenic materials and the turbine technology it has cultivated in the development of high rotational speed machines.

A liquefaction system is the key piece of infrastructure needed to achieve mass transport of hydrogen. Hydrogen gas is light but extremely bulky, which makes it difficult to transport in a gaseous state. A hydrogen liquefaction system converts hydrogen gas to liquid by lowering its temperature to –423°C (–253°C) and reducing its volume to approximately 1/800 of its gaseous state, making the transport of mass much more effective.

Japan is leading the effort to build an international hydrogen supply chain to manufacture large quantities of liquefied hydrogen overseas and supply it to Japan by sea.

This flagship project was launched in 2015 with a grant from the New Energy and Industrial Technology Development Organization (NEDO). In 2021, the world’s first liquefied hydrogen carrier, built by KHI, will make its first round trip between Japan and Australia. And Iwatani will load, unload and store the liquefied hydrogen.

Prior to setting up this large-scale hydrogen supply chain overseas, Iwatani is working on producing clean hydrogen from lignite in Hokkaido, Japan.

The Japanese Ministry of Economy, Trade and Industry (METI) foresees the widespread use of hydrogen as a fuel for thermal energy, which calibrates the balance between supply and demand of the electric grid. . For fuel cell vehicles (FCVs), including buses and trucks for long-distance transportation, Iwatani is developing infrastructure with hydrogen stations. Future applications could include powering construction machinery, ships, trains, and perhaps even aircraft.

While KHI and Iwatani now source clean hydrogen by extracting it from coal in Victoria, Australia, these companies and Japan are also considering collecting green hydrogen from solar, wind, nuclear and other sources without CO2 emissions.

Through the efforts of KHI and Iwatani, METI predicts that Japan will have a commercial hydrogen supply chain from overseas by 2030 to establish a domestic market of 3 million tons at a cost of 0 US$.29 (¥30) per cubic meter.

The Green Growth Strategy is designed to bring about step change in Japan’s business, energy, industrial and transportation sectors, and METI sees a sustainable future, dependent on hydrogen and other innovative technologies, as essential. for Japanese industry and society.

To attract businesses around the world to green growth, METI offers tax incentives and funding for research and development from the Green Innovation Fund, with a budget of US$18.9 billion (US$2 trillion). yen) over 10 years. The Diet, Japan’s legislative body, is also considering growth-oriented regulatory measures.

The will to change is already strong. About the association Carbon Disclosure Project (CDP) 2020 A-List53 of the 278 companies rated A for climate change were based in Japan.

Now is the time for organizations around the world to join the movement and build on this momentum in Japan and beyond.