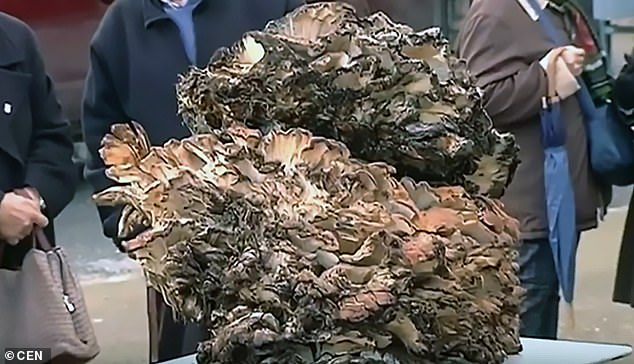 Make room for the mushroom! Spanish chef stumbles upon ‘biggest mushroom of all time’, weighing 152 pounds

By Oz Katerji For Mailonline and Cen Agency

The 68.8 kilogram (152 pound) specimen of Meripilus giganteus was found in the town of Santa Lucia de Gordon, in the province of Leon, in the north-central Spanish region of Castilla y Leon.

According to local media, Chief Sergio Martinez Valledor spotted the huge mushroom while walking through a nearby forest.

Martinez Valledor told local media: “I found him by chance, I wasn’t looking for him. He was stuck to a beech.”

The chef and his friends cut the mushroom in half and dragged it to their vehicle.

The huge mushroom on display in chef Martinez Valledor’s restaurant

Martinez Valledor added: “It broke in half, the lightest part weighed 22 kilograms (48.5 pounds) and the other section weighed well over 40 kilograms (88.2 pounds) which was very difficult to hang around.

“We managed to get it back in the car, but we were afraid of breaking it.”

According to local media, the Meripilus giganteus breaks the previous record of 23 kilograms (50.7 pounds) and the Guinness World Records would look into the find.

The chef said the mushroom cannot be cooked because it is too big, but he plans to extract its scent. He is also ready to let any interested scientist study the specimen.

The mushroom is currently on display at the Aurea restaurant in the Plaza del Grano in the city of Leon.