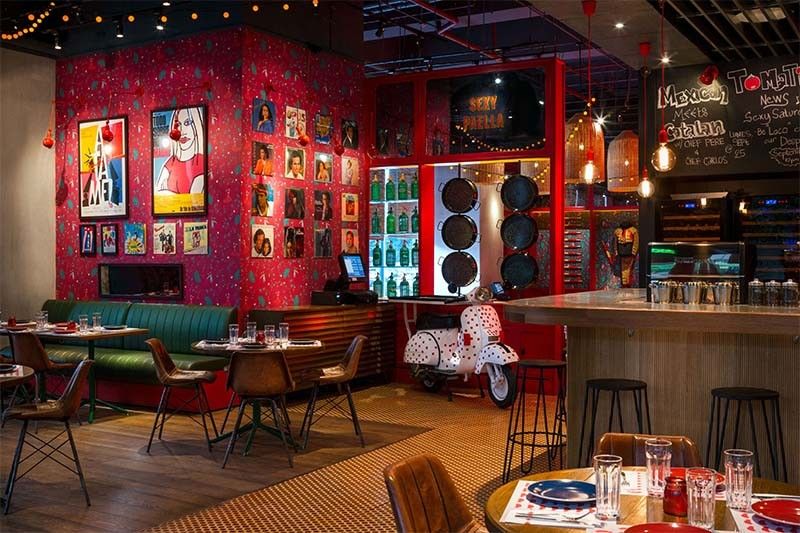 MANILA, Philippines – A tapas bar in Bonifacio Global City, Taguig City will get “sexier” and have an even more authentic Spanish vibe after Madrid-born Ivan Fernandez takes over as head chef.

Directly after his three-year stint as sous-chef at the Spanish tapas chain in Shanghai, Tomatito, Fernandez brings his knowledge and expertise to make Tomatito’s Manila branch feel right at home in Spain.

Ivan Fernandez (center), is the new chef at the sexy tapas bar, Tomatito. In this photo, he poses with his business partners Dani Aliaga and Sergi Rostoll. Philstar.com/EC Toledo IV

Tomatito, which opened at BGC in 2016, was originally based in Shanghai under the El Willy Fun F&B group led by chef Willy Trullas Moreno.

Its name was coined from the nickname of the iconic Spanish flamenco guitarist, Jose Fernandez Torres.

The word “tomatito” was also called “small tomatoes” in Spain.

The bar is known for its ‘sexy food’, which is also reflected in the restaurant’s alluring interiors and cuisine.

True to its brand, the sexy tapas bar is adorned with a funky ’80s design and a bright red hue.

A taste of Spain in Manila

Fernandez, who was recently appointed chef at the tapas bar, said he found things he didn’t like on the previous menu. So he decided to change it and add Spanish style food and service.

The 30-year-old chef has just arrived in the country three months ago. He said he first familiarized himself with the previous menu and changed it.

He also indicated that the previous Tomatito was more of a restaurant, which he also wanted to change without compromising the Spanish tradition on every plate.

â€œThe concept was born in Shanghai. El Willy is the mother restaurant, more chic and upscale. Tomatito came out as a cheaper and more laid back experience, â€said Fernandez. Philstar.com

â€œMy goal is to make me feel like it was in Chinaâ€¦ like a place where when I walk in [I can say] I am at home, I am in Spain, â€he added.

To realize his vision, Fernandez recently presented his selection of Spanish dishes highlighting the flavors for which Tomatito is known.

â€œThe restaurant and its cuisine have been influenced by the traditional Spanish tapas bars found in Andalusia, where people get together, eat tapas, drink wine and listen to great music,â€ he said.

Some of the Spanish dishes meant to satisfy the palates of Filipino and foreign diners include the following:

TNT of salmon or the explosion of smoked salmon balik with honey and truffle. Philstar.com/EC Toledo IV

He said these Spanish dishes pair best with Spanish wine, beer, and sangria.

The new chef has said he wants to surprise guests, so he plans to add new items to the chef’s specials every month.

Among the dishes lined up, let us quote the Paella de mole Mexicano, a revisited chicken paella, cooked in the traditional Mexican mole; as well as the Crema de Queso con Manzana Verde dessert or the liquid cheese cake with green applesauce and cinnamon crumble.

Interactive team behind the kitchen

You can see Fernandez preparing all of this in the open kitchen, which he considers a “window”, so that guests can see how he and his entire Filipino team are working to standards of hygiene and cleanliness.

â€œI would also like our staff to be a little more interactive with our customers in keeping with the playful element of the restaurant and so that they could answer questions about the restaurant,â€ added the chef.

Currently, the restaurant is affiliated with Bistronomia, the same company behind Spanish restaurants and the food chain Rambla, Las Flores and La Lola Chureria. – Video by EC Toledo IV