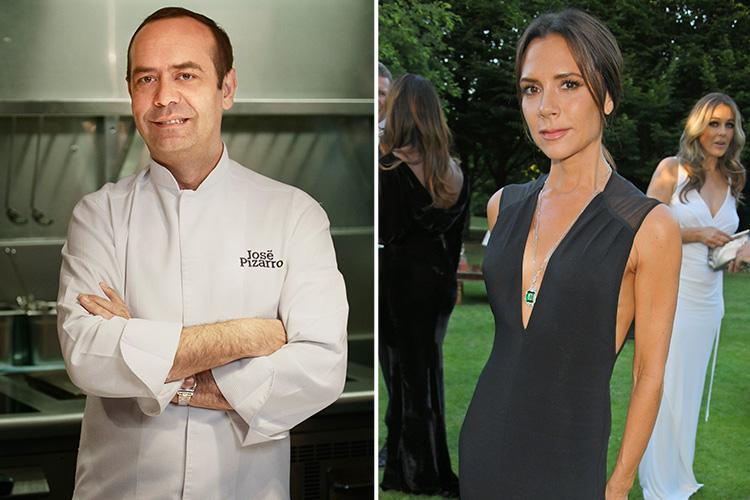 “SHE had a little green salad,” says JosÃ© Pizarro, recalling the time Victoria Beckham barged into the Borough Market restaurant he ran.

â€œShe had dinner with her son and ordered a lot of different dishes from them. What a delicious woman! She was really lovely with the waiters – and left a very generous tip.

But Posh isn’t the first A-lister to love JosÃ©’s acclaimed plates. The 47-year-old chef – nicknamed the King of Tapas, such is his influence on the Spanish culinary scene in Britain – has fed everyone from Jude Law to Monica Lewinsky and Tracey Emin.

Celebrities regularly flock to his eponymous restaurant, tucked away on Bermondsey Street near London Bridge.

Not bad for a guy who came to the UK 19 years ago unable to speak a word of English and with only Â£ 250 in his back pocket.

JosÃ©, who will be discuss his life in food at the Abergavenny Food Festival on Friday, grew up in Extremadura, in west-central Spain, in the small village of TalavÃ¡n. His parents were farmers and he spent his childhood helping his father produce vegetables, dairy products and meat.

â€œWe drank milk straight from the cow. Aahâ€¦ it was still hot and incredibly delicious, â€he said. “And my mom made the most amazing churros.”

JosÃ©, eager to avoid a life of agricultural work and earn money, decided to take training as a dental technician. â€œI’m very good with my hands and knew it would be easy to find a job,â€ he said. “But I wasn’t that passionate about it.”

While waiting to take office, he took a three-month cooking course – and quickly found his â€œcallingâ€. He said: â€œAs a dental technician you spend a lot of time behind a desk, it wasn’t for me. I am very sociable, I love people. Studying was not a loss though, I learned to be very organized and tidy – that’s important in the kitchen.

JosÃ© focused on learning as much as he could about food and cooking. He then worked at El Chapin de la Reina, a Michelin-starred restaurant in Madrid, then became chef de cuisine at El MesÃ³n de DoÃ±a Filo by Julio Reoyo.

Then, after a drink by chance with an English friend in 1998, he decided to settle in London. â€œI could barely say ‘hello’ in English, but I knew I needed to learn different cuisines, not just Spanish,â€ he said. â€œIn London, there was Chinese, Portuguese, Indian, Thai foodâ€¦ I fell in love with it.

JosÃ© started working at Gaudi, a Spanish restaurant in east London, before moving to Eyre Brothers in Shoreditch where he became a chef. His English developed rapidly as he joked with the kitchen staff. He stayed here until Monika Linton de Brindisa, one of the restaurant suppliers, offered to open a restaurant.

Getting the British to abandon their meat and two vegetables in favor of small plates has not been easy. â€œThe British were so used to having a starter, a main course and a dessert. The tapas were a surprise, â€he said.

â€œBut people loved it. It’s a social way of eating and brings everyone together. The British are open to different things but I never thought it would be such a success. They also loved the open kitchen and seeing the chef at work.

One thing he struggled to get the British to understand was cooking with olive oil. â€œI went to Manchester 16 years ago and did a demo at Selfridges. I used olive oil and a few people looked at me like I was crazy, â€he said. “They didn’t want to taste something cooked in olive oil because they said they used it to clean their ears – but that was 10 years ago!”

JosÃ©, who prides himself on quality, simple and seasonal cuisine using the freshest possible ingredients, believes that English cuisine is unfairly criticized. â€œThe selection of ingredients here is amazing,â€ he said. â€œPlus you can get a delicious lunch for so cheap. The street food scene is unmatched.

In June 2011, he opened JosÃ©, a small tapas and sherry bar in Bermondsey. â€œIn Spain, it’s the tradition to give your name to a restaurant, it’s an extension of who you are,â€ he says.

It was a success and in December he opened Pizarro. In 2015, he opened his third room, JosÃ© Pizarro in Broadgate Circle in the City.

JosÃ©, who has a partner called Peter and lives in Kennington, London, regularly returns to Spain to see his mum, Isabel, 85.

JosÃ© follows his late grandfather’s philosophy of healthy eating. â€œNot everything has to be super healthy all the time.

â€œMy grandfather ate fat every day, drank half a bottle of wine and had a fabulous life until he was 95. He worked hard, he ate vegetables every day. You have to be reasonable.

Do you mean chic? Now pass the croquetas.

JosÃ© Pizarro will talk about his culinary life at the Abergavenny Food Festival on Friday September 14th. Click here to buy tickets.