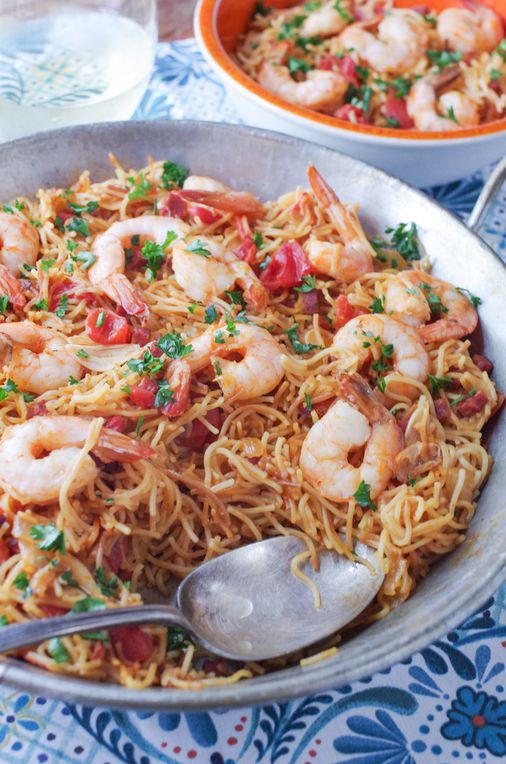 Fideos is both the name of a short, thin dough and the word for a Spanish paella-like dish in which the pasta is first grilled in oil, then mixed with chorizo â€‹â€‹and paprika. smoked, called pimenton, and simmered in a broth with shellfish. (Mexican cooks make dishes similar to brown angel hair.) For this Spanish version, use chicken or fish broth, or make a simple shrimp broth by cooking the shells in 5 cups of lightly salted water. for 10 minutes ; then strain.

1. Wrap the pasta in a kitchen towel and use a small skillet or rolling pin to pound it so that it breaks into 1 to 1 Â½ inch lengths.

2. In a medium saucepan, bring the broth to a boil.

3. In a 12-inch skillet over medium heat, heat 3 tablespoons of oil. Add the pasta and cook, stirring and turning with tongs, for 3 to 5 minutes, or until golden brown, taking care not to burn. Transfer the pasta to a bowl; cool.

5. Stir in the pasta. Increase the heat to high and add 2 cups of hot broth. Stir to mix it. Add 2 more cups of broth and stir gently. Bring to a boil. Lower the heat so that the mixture barely simmers. Nestle the shrimp in the mixture. Simmer over medium heat for 2 to 3 minutes, stirring once or twice, or until the pasta is tender but still has bite and the shrimp are just cooked through. While cooking, add Â½ to 1 cup more broth, little by little, if the liquid has been absorbed and the pasta is not cooked. When the fideos is over, there should be no excess liquid in the pan.

6. Taste the pasta for seasoning; add more salt, if desired, and sprinkle with parsley. Serve in shallow bowls with lemon.

Lisa Zwirn can be contacted at [email protected]