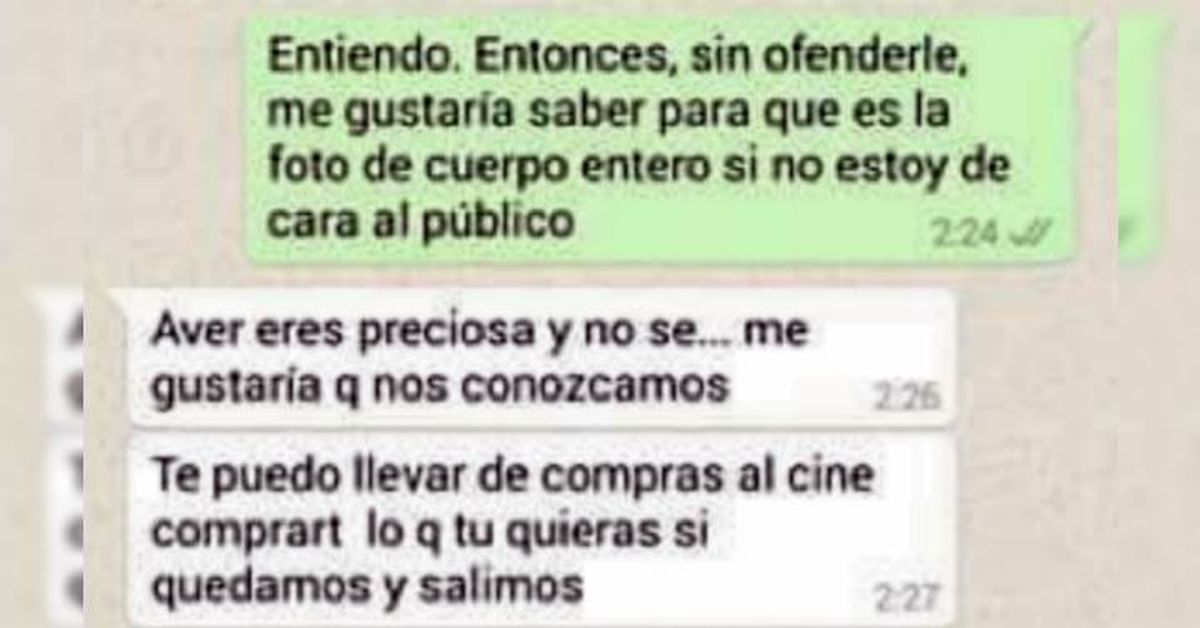 In recent days, a WhatsApp conversation between a chef in a Madrid restaurant and a candidate for a job has been touring social networks.

â€œRight now we’re trying someone out, but send me a picture of you in full so I can see you better,â€ says Ãstor’s chef, to which the candidate replies: â€œNo offense, but I would like to know why you need a full body photo if I am not in public service. The leader then sums things up and declares his true intentions. The conversation is as follows:

“Hello, I saw your ad on the Job Today app and they gave me your number. My name is **** and I study in Madrid. I only have classes on Mondays and Wednesdays afternoon. The rest of the time I am free. I am a very responsible and hardworking 25 year old girl looking for work to fill my week and help my mother pay for her apartment. I am waiting for your response . “

“Right now we’re trying on someone, but send me a full body photo so I can see you better.”

“No, I’ll teach you how to present the dishes and you can lend a hand.” “

â€œI understand. Without wanting to offend you, I’d like to know why you need a full body photo if I’m not in public service.

The WhatsApp conversation was first shared on social media on March 17 after it was posted by Twitter user @suripantarosa. The original tweet, which has since been deleted by the author, explained that the conversation was sent by a friend of a friend. The story has also gained visibility thanks to the El HematocrÃ­tico The Facebook page.

Referring to the chef, the owner of Ãstor, AndrÃ©s Olivares says: â€œI asked him to look for an assistant weeks ago. I gave him the responsibility and he got us into this mess. It’s not our style, far from it.

When the conversation came to his attention, Olivares quickly fired the chef, who admitted to addressing the plaintiff in chauvinistic terms. â€œI don’t know when this conversation on WhatsApp took place,â€ adds the owner. â€œOn Friday we were serving lunch and some friends started tweeting us. It was very hard. It was a disciplinary dismissal he signed, acknowledging what he did.

On the same day, Olivares posted a message on Facebook expressing how much he hated this kind of behavior. â€œI deleted the restaurant’s Facebook page until things calm down,â€ he says.

â€œMy name is AndrÃ©s Olivares. I am the owner of the Ãstor restaurant. First of all, I want to apologize to the person who was nominated and to anyone who might feel insulted by what happened. Sorry, really, from the bottom of my heart. I will explain what happened. We asked the chef to look for an assistant. He took the opportunity to behave like this. As soon as we learned what had happened, he was fired. It was a disciplinary dismissal. I am now trying to get in touch with the woman in question and speak to her personally. I am really sorry. It’s not our style. We hate that kind of behavior. I will post pictures of the termination and the action that was taken against the employee who made personal use of a professional role that has nothing to do with our policy. NOTHING. I am really sorry. The whole team is really sorry. Sorry and very ashamed.

This isn’t the first time this kind of incident has gone viral. In March 2016, a customer of the MRW messaging service tweeted that one of her employees had contacted her in the same way. “It’s not just stupidity, it’s a crime,” the affected client told EL PAÃS. At the time, a spokesperson for the consumer and user organization, OCU, said it was â€œnot a common event.