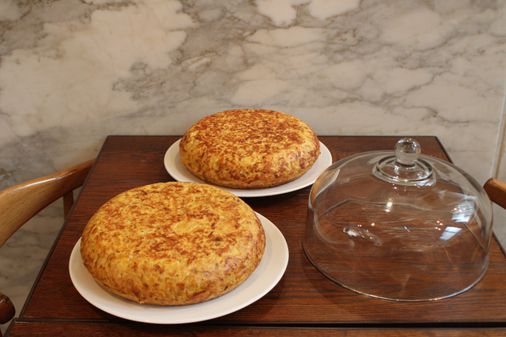 LONDON – As a schoolgirl, Monika Linton, 53, chose to study Spanish over the more popular French. It was his first step in helping to transform the image of Spanish cuisine in London. After obtaining a university degree in Spanish, she moved to Barcelona, â€‹â€‹where she spent a summer working in a restaurant, then three years as a mountain teacher.

Linton returned to England and started importing food from Spain. Today, his company Brindisa, founded in the 1980s, is synonymous with high-end Spanish products and has helped transform manchego cheese, chorizo â€‹â€‹and Serrano ham into essential ingredients. Initially a wholesale and retail business, Brindisa has grown to include five Spanish restaurants in central London. Not afraid of an unconventional decision, Linton recently opened a traditional Catalan restaurant in Barcelona.

Arriving by bike at Casa Brindisa, near the Natural History Museum, Linton is warmly greeted by his all-male team of Spanish chefs. A large slice of potato tortilla (potato tortilla) arrives next to the table with tall glasses of horchata, a refreshing almond milkshake.

Linton’s love for Spain was inherited from her father, who had visited the country in his youth and “talked about it in such a romantic way,” she recalls. At first, in fact, she operated her business from the living room of her parents’ house. She visited avant-garde chefs to introduce them to Spanish cheeses, olive oil, hams and salted fish. Soon Brindisa’s products began to appear on the menus and shelves of London delicatessens. â€œI went to stores like Harrods and explained that Spain would soon be part of the European Union,â€ she recalls. “They had to make room on their cheese counter for Spanish products.”

Restaurant owners overseas also became interested in its access to Spanish food, and Linton began supplying cheese to stores like Formaggio Kitchen in Cambridge and Dean & DeLuca in New York City. â€œIt was the pre-Internet era, Spanish food wasn’t really coming to America yet,â€ Linton says. “Spain was still unknown and out of reach because there were no shipping lines, no logistics to facilitate.” Wanting to sell directly to the public, Linton opened a boutique in 1988.

Fast forward to 2015, with everything online. Now Linton’s challenge is to find the unknowns. â€œWe select from small producers who produce quite unique products. We try to support the countryside and traditional food manufacturing so that we don’t all become industrialized consumers, â€she says.

Linton opened her first tapas bar in 2004. As the mother of a growing offspring, she talks about her six restaurants like siblings to a family. Although they all share the Brindisa name, each has their own unique look and specialty: paella, tapas, asados â€‹â€‹(roasted meats) or pan con tomate (bread rubbed with tomatoes) topped with ham, cheese or of salted fish.

His growing empire has seen successes and frustrations. While its customers love to eat mojama, an air-dried fillet of tuna, salted fish roe has not been long on menus. The local taste for spicy foods forced Linton to persuade a reluctant vendor to turn up the heat of the chorizo. â€œThey said, ‘You can’t make hot chorizo,’ cause it just puts the whole thing out of balance,” “Linton recalls. â€œIn the end, they did it for us and it’s very popular in restaurants. The Spanish don’t like hot food.â€

Brindisa has set up a cheese factory to house the fragile and volatile products of the Linton sources. She brings back cheeses that no one exports from Spain. The Churra sheep in Castile and the Latxa breed in the Basque Country produce a milk rich in fat which makes it a richer cheese. “There are new cheese makers leaving the cities in Spain and returning to the countryside,” explains the entrepreneur. “They have some really amazing products. Cheesemakers can vary the recipe and innovate every day.”

The name Brindisa comes from “brindis”, the Spanish word for a toast. As Casa Brindisa fills up for lunch, diners enjoy glasses of sherry, slices of the famous Monte Enebro cheese and platters of the famous Iberian Bellota ham.

The young woman who once taught English to the Spaniards made a career out of educating the British about Spain. Like all the best teachers, she made the lessons fun.