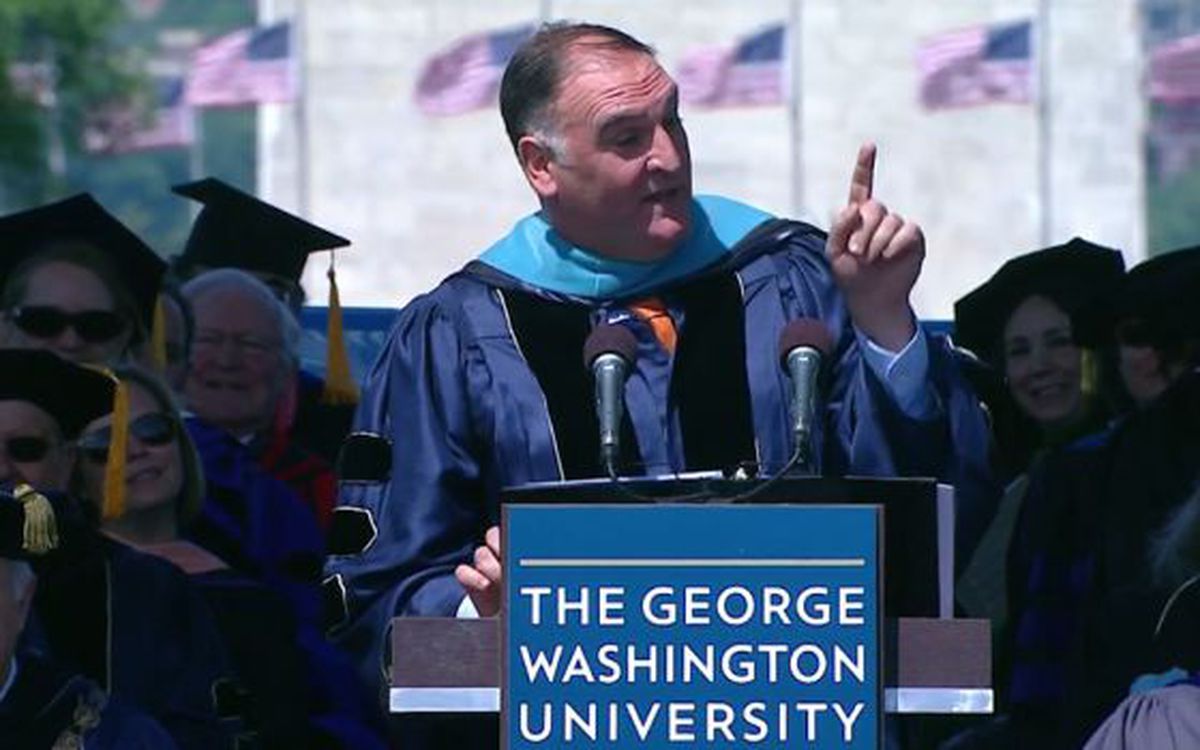 Before this Sunday, Spanish chef and television personality José Andrés had never attended a university graduation ceremony. He left high school as a teenager and trained in “the kitchen of life”, he confessed to the crowd of 25,000 at last weekend’s ceremony for graduating students from George Washington University in the US capital.

The occasion was not his own graduation but rather his confirmation as one of the most important voices in Washington today. As the owner of the number of successful restaurants who have been invited to show off his skills in the White House kitchen, Andrés has also earned a spot on the exclusive list of names who gave the graduation speech at one of the most prestigious seats of learning in the United States. Last year, actress Kerry Washington had the honor of addressing graduate students at the university; before that, it was the turn of television journalist Brian Williams. In 2011, then-New York Mayor Michael Bloomberg gave the speech and before him, First Lady Michelle Obama sought to inspire students entering the workforce.

Dressed in the blue and black college gown, Andrés admitted that when he told one of his daughters that he had been invited to such an important event, she immediately asked him “if he was going cook or talk” to the 25,000 guests. The chef apologized to the crowd for not being nominated for an Oscar or winning a Nobel – “yet” – and for not being as “interesting” as Barack Obama’s wife.

Success is about using your talents to do something bigger in the world.”

Then he unveiled the surprise he had in store for graduates and their families: a star-studded video that sets the bar high for whoever will be chosen to follow him in 2015. The montage showed actors like Gwyneth Paltrow, Morgan Freeman and Owen . Wilson declined college president Steven Knapp’s request to give the speech with a variety of excuses, before all coming up with the same idea: call Andrés.

After the joke, which received a standing ovation from the crowd on Washington’s National Mall, Andrés turned his speech into an invitation for new graduates to adopt a more ambitious definition of personal success, which includes making an impact. positive about the lives of others. .

“The challenges we face today – hunger, poverty, inequality, war – have always been there, but that doesn’t mean it has to always be that way,” he said. “Success is no longer just about achieving your goals. It’s about using your skills and talents to do something bigger in the world. It’s the new American dream.

The chef, who recently obtained US citizenship, said he always wanted to be part of that dream. “I fell in love with the idea that no matter where you were from, anything was possible here,” he said, reflecting on his journey as a Spanish immigrant to Washington and the effort it took to forge a globally recognized brand. capital for several years now.

“My story is not one of overnight success. When I found myself alone in a new country, I didn’t buy a lottery ticket and hit the jackpot. I just carried on,” he concluded.