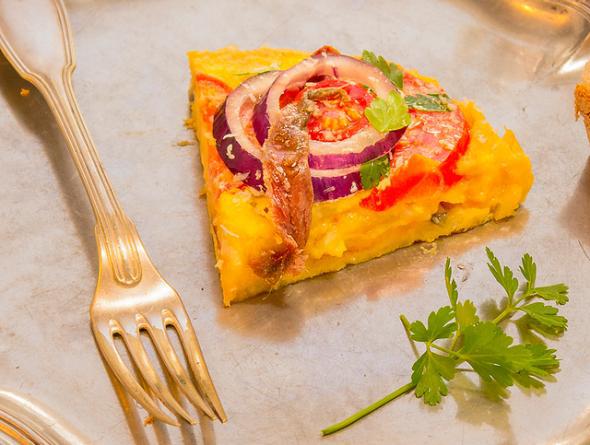 Word tortilla is a diminutive form of pie, one of the many Spanish words for “cake”. Torta means different things in different countries – and this is also true of its diminutive form. In Mexico and Central America, tortilla Usually refers to the flatbread made from cornmeal or wheat flour that Americans know and love. In Spain, it more commonly refers to an egg and potato dish resembling a frittata. The latter, unlike the first, can legitimately be described as a savory cake: it is thick, rich and tasty.

I would never say that the Spanish tortilla is superior to the Mexican tortilla: each is important and necessary in its own way. But I want to suggest that maybe when we Americans hear the word “tortilla,” our minds shouldn’t automatically jump to flatbread. Because we are lacking.

Take into account spanish tortilla, often translated as “Spanish omelette”, an extremely inaccurate and unfair English rendering of omelets and tortillas. An omelet is chewy, supple, and ideally pale rather than golden. A Spanish tortilla is none of these. To even describe it as a potato frittata, like I did a few paragraphs ago, is a bit off the mark. Like a frittata, a tortilla is dense, substantial, and meant to be cut into quarters. But a tortilla is a much more specific thing than a potato frittata: you can’t just boil potatoes, pour eggs over them, bake the thing and call it a day. A tortilla isn’t a tortilla unless it’s made with potatoes that have been slowly braised in lots and lots of olive oil. It’s not the same as deep-frying – your goal is to cook the potatoes (with onions) until they are extremely tender, not to make them crisp.

Once this is done, most of the oil is drained. (You absolutely need to keep this onion and potato infused oil in the fridge and use it in other savory dishes – your roasted veg will be sublime for weeks on end.) But that dripping doesn’t mean a tortilla is. a low fat dish. You don’t try to completely rid the cooked potatoes of the oil before adding the eggs; don’t, God forbid, mop up the excess oil with paper towels or something like that. You need some of this residual fat to help crisp and brown the surface of the tortilla.

Traditionally, you brown a tortilla on both sides by turning it halfway through the stovetop. I am not a traditionalist in this regard. It’s much easier to just bake everything in the oven, where that residual fat will end up on top of your tortilla and give it a gorgeous brown shine. (Pour oil that collects on top of tortilla before serving.)

On the other hand, I am a traditionalist. A Spanish tortilla should contain peeled potatoes, onion, eggs, olive oil, salt and pepper, nothing else. Ultra-Orthodox types might challenge me on the pepper, which interferes with the otherwise evenly creamy interior of the tortilla. But eggs and black pepper are irresistibly harmonious, like Tegan and Sara. Don’t fight it.

1. Heat the oven to 375 Â° F. Put Â¾ inch of olive oil in a large saucepan over medium heat. When hot, add the potatoes and onion, season with salt and pepper, and toss well to coat with oil. Cook, stirring occasionally, until potatoes and onion are very tender, 30 to 40 minutes.

2. Meanwhile, break the eggs into a medium bowl, season with salt and pepper and beat vigorously for about 1 minute. Place a large skillet over medium heat; when it’s hot, transfer the potatoes and onion from the pot to the pan with a spatula or slotted spoon, leaving most of the oil behind. (Reserve the oil for another use.) Pour the eggs over the potatoes and onion, stir very gently just to evenly distribute all the ingredients in the pan and cook until golden brown, about 20 minutes. Serve hot, at room temperature or chilled. (Store leftover tortilla wrapped in foil in the refrigerator for up to a few days.)