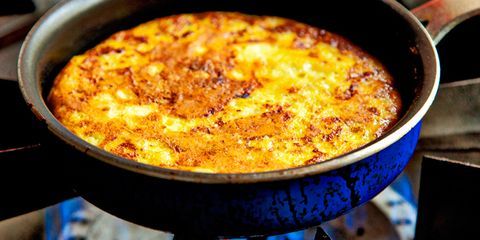 Published in the January 2013 issue

Spanish tortilla is Spain’s national dish, and its preparation is an inherited skill: you learn the knee-inversion technique from another cook, standing upright and admiring the economy and fluidity of movement until when you handle the pan yourself. I received my tortilla espaÃ±ola education from the wife of a winemaker I was visiting in Spain, a gentle woman who explained her secret to making a good tortilla great: once the potatoes and onions are cooked, she mixes them with the beaten eggs and lets the mixture sit for at least an hour. The hot potatoes give off starch in the egg mixture and the potatoes soak up the egg, giving the tortilla its incredible creamy texture. She also pulls out a jar of local hot peppers to eat on the side. To date, hers is the best tortilla I have ever eaten, and I still serve mine with a blend of roasted red peppers and jalapeÃ±os lightly seasoned with sherry vinegar for the same flavor mismatch. When I left, I promised her that I would stick to her dish as best I could, continuing to use the technique she taught me. There’s no trickery here (except a nonstick skillet): it’s a simple, honest dish, and once you get the hang of it, you’ll do it forever.

How to make a Spanish tortilla

Heat the olive oil in a 10 inch anti adhesive skillet over medium heat and add the potatoes and onions. Stir occasionally and season with salt and pepper. Cook until the potatoes are cooked and the onions are tender, 8 to 10 minutes. (Make sure that the oil never gets so hot that it does not fry the potatoes or give them a color; the potatoes should instead ‘simmer’.) Turn off the heat and let the vegetables cool for a while. 10 minutes. That way they’re still hot but not too hot, so they won’t start cooking the eggs in the next step.

Break the eggs in a large bowl, season with salt and pepper and whisk until well combined. Using a slotted spoon, pour the potato and onion mixture into the eggs, making sure to keep the oil in the pan, and stir to combine. Reserve the cooking oil.

Cover the egg mixture and refrigerate for at least one hour and up to eight.

When you are ready to cook tortilla, heat same pan over medium heat. Add 2 tablespoons of the reserved oil. Pour the egg mixture into the pan and cook undisturbed very slow heat until sides of eggs are set and medium begins to set, about 10 minutes. Place a large plate on top of the dish and turn over. Gently slide the tortilla into the pan with the cooked side – which shouldn’t be brown and overly fried, but rather a pillow of fluffy, butter-colored eggs – facing up. (See illustration below.) Cook for another 3 minutes and remove from heat. Let stand in the pan for a few minutes.

To serve, turn the tortilla over on a cutting board and cut into quarters.

COMPETENCE NO. 1: How to flip a tortilla

1. To flip the tortilla, hold the handle of the pan in one hand and place a plate larger than the pan on it.

2. In a gentle rotating motion, turn the skillet over onto the baking sheet.

3. Then, gently return the tortilla to the pan, cooked side up.

POINT: The lighter the pan, the easier it is to handle. This is one of the few times that a cast iron skillet isn’t ideal. Too heavy.

This content is created and maintained by a third party, and uploaded to this page to help users provide their email addresses. You may be able to find more information about this and other similar content on piano.io